Just about everything's been said Robert Johnson, legendary bluesman (and you really should be listening to him), and much of it can't be confirmed. But I don't believe that this has been mentioned.

Robert Johnson is famously known for, among many other things, posing with a Gibson L-1 guitar in one of two known photos of him- the poised, dapper studio photo that graces the front of the Complete Recordings CD.

It's such that Gibson has put out a signature model of the guitar- at a high price, I might add.

But look closely at the twelfth fret- the fret with two dots, in case you can't tell- you'll see that it meets the body of the guitar.
Why do I mention this? Well, as a guitarist myself who has studied his music, I can tell you that it's very difficult to play beyond the twelfth fret if it meets the body without a cutaway. Believe me, I've tried.
But according to the extremely thorough songbook Robert Johnson: The New Transcriptions, at least one song- "Come on in My Kitchen", one of my favorites- requires that you play notes at the fifteenth fret. This is very hard to do with my dinky little Silvertone acoustic.

But look at the other known photo of him- the informal, darkly brooding photobooth portrait. Look at where the two-dotted fret is. 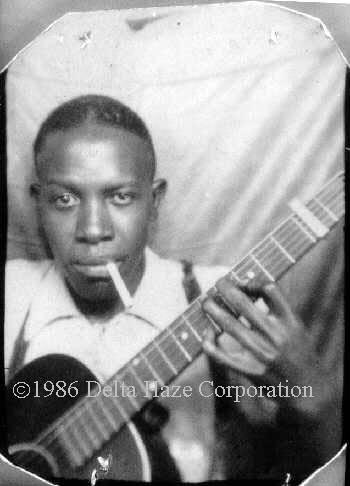 The twelfth fret is now above the body. This is a different guitar! Even that was a revelation to me. But the fifteenth fret is now much easier to reach.

This lead me to the conclusion that the guitar he uses in this second portrait is in fact what he used for, at the very least, the Nov. 23rd recording sessions in 1936. I find it unlikely that he had two at any given time, given his financial situation. (So perhaps the more formal portrait was taken during a later period, and he'd gotten a new one by that point. Who knows? Maybe he just borrowed it.)

So before you cough up over two thousand dollars to buy the Gibson signature model, consider whether or not it's actually suited to playing his music. At the very least you can make it easier for yourself by playing "Come on in My Kitchen" without a capo, unlike what The New Transcriptions recommends.
Posted by tymime at 2:41 PM No comments: