The curious tale of Ringy Roonga and Freddy Fox

Children's comic books have the uncanny tendency to transform licensed characters who- in their original medium, be it film, TV, what have you- typically did little beyond get into a conflict of some sort and proceed to do some gags around the premise for about 9 minutes. Plots weren't exactly complex. In the comics, your favorite characters, ranging from Donald Duck to Howdy Doody, traveled to far-off lands, encountered fantastic creatures, and met strange people for up to 56 pages. As near as I can tell, this trend began in 1930 with the first Mickey Mouse newspaper strips, which took Plane Crazy and eventually turned it into Mickey winding up lost on a desert island (although it wouldn't be until "Race to Death Valley" that it would move beyond the gag-a-day format). The animated Donald throws a tantrum over a box of cake mix, whereas comic book Donald discovers the lost city of Camdenia.

Even more remarkable is when these writers and artists take these characters and breathe such life into them as to create their own universe with a full cast of characters and places that last for years and even decades in print, without ever being seen on the big or small screen in motion. Famous as he is, Scrooge McDuck only appeared once animated in his long career before DuckTales and Mickey's Christmas Carol even existed (Scrooge McDuck and Money, 1967), and one need only take a look at his page on INDUCKS to see his worldwide popularity- with thousands and maybe even more appearances in comics the world over. It's hard to believe that he was originally created by one man as a one-off villain.

One curious off-shoot of this phenomenon is that every now and then the characters chosen aren't very popular or even that well-known. They may have appeared only once, and the average person will never know that their adventures continued elsewhere, hidden from them between the pages of an old comic lying about in some antique store, often not even in English. One of the best-known examples would have to be Sniffles and Mary Jane, who appeared in Dell's Looney Tunes comics for many years.

Sometimes, characters who never even appeared alongside each other on celluloid will team up together and create a surprisingly coherent whole- Disney comics in particular have succesfully blended the worlds of the Three Little Pigs, Brer Rabbit, and Chip 'n' Dale, with the worlds of Snow White, Bambi, and even Bongo occassionally making appearances, all living within the same presumably massive woods.
(These don't always work out, however, and such pairings such as Supergoof and The Jungle Book will pop up, making one wonder how these could have possibly been conceived without the aid of hallucinogens.)

Licensed children's comics are odd ducks. Suffice to say, this particular entry is about one of the odder ducks.

November 30, 1940- Warner Bros. releases Looney Tune Porky's Hired Hand, the amusing story of one Gregory Grunt, a large, goofy pig whom Porky hires to guard his chicken house. It goes about as well as you might expect. Gregory finds himself up against a tricky fox with the exact same voice as Bugs, which I imagine Mel could get away with at the time since A Wild Hare had only been released the previous summer. In the end the fox accidentally locks himself in the incubator room and shrinks down to pint-size.

December 7, 1940- Tex Avery borrows Friz's fox design nearly wholesale for his Merrie Melodie Of Fox and Hounds released mere days later. It was the first time that the Termite Terrace gang used the "George and Lenny" formula, the comedic duo of a large slow-witted man and his tiny quick-witted partner, inspired by the 1939 film Of Mice and Men- which oddly enough, is actually a drama. If you've ever wondered where "Which way did he go, George?" came from, this is it.
Here the fox is, of course, named George, and goes up against the huge, lumbering Willoughby, a sorta-St. Bernard trying to be a Foxhound. Those of you who remember the days when Looney Tunes aired on TV probably remember these two shorts, though they aired fairly infrequently.


A year later, the first issue of Looney Tunes and Merries Melodies Comics was published. The earliest days of the title were extremely cheaply produced, and you'll find many badly-drawn, out-of-character stories, adaptations of recent shorts, and a good amount of filler material of characters that no doubt made many a kid think "Who the heck are these guys?", shrug, and have another sip of soda pop.


One such adaptation is of Porky's Hired Hand, which appears to have been traced from stills. It shortens the story a bit, and changes the dialogue here and there, but is on the whole unremarkable.


And on the filler side, we find the first chapter of "Pat, Patsy and Pete", an ongoing story about the sea-faring adventures of two kids and their trouble-making talking penguin. Pat and Patsy are with their uncle, a famous scientist and explorer, on safari in the South Seas in search of the rare ring-tailed roonga. After a run-in with some obligatory racist stereotypes (and one more issue), the troop manages to capture a specimen, and sail off back to New York, and in the issue after that, the trio promptly abandon the ship, their uncle and the plot to go have some bizarre adventures underwater (but that's another story).


Apparently George is now "Freddy", and is important enough to have a little rhyme about him along with the rest of the gang! What prompted this? Did somebody think that he was going to be in more cartoons? Or did they just like him that much? Whichever it was, the folks at Dell have decided that Freddy is going to be recurring character, and you kids ought to get to know him.


What became of Captain Water and the rest of the crew in PP&P is unknown, as we never see hide nor hair of them again once the kids and Pete don their diving helmets. The tale becomes stranger as we find in issue #4 that the ring-tailed roonga, now going by the moniker "Ringy", eventually escaped and is now roaming the streets of an American suburb. Completely redesigned from a vaguely George Herriman-esque cat-shape, Ringy is now a cuter, more skunk-like creature in the style of early Chuck Jones. He meets up with Mary Jane and Sniffles, and takes part in one of their many fairy-tale adventures.


You have to wonder what exactly went on in Dell's comics department during this period. Why take a minor character from one continuity, cute him up, and give him his own feature with only one issue in between? Was it perhaps prompted by the sudden shift in gears over in PP&P? Did someone feel that such an imaginary animal had the potential to become a character in his own right, and took it for his own use when he saw that it would be no more in its original context? It was certainly easily done- when you're only a faceless cartoonist working for a major publishing company, none of your work really belongs to you. And why change his country of origin from Polynesia to Africa? Why why why?
But wait- there's one more twist in the road.


In issue #8, perhaps the result of a "what should we do with these guys?" brainstorming session, Freddy Fox reappears as Ringy's new antagonist. Freddy has taken on a new look himself- one that isn't quite as distinctive as he once was, and more like Honest John from Pinocchio in a pair of baggy pants. This story introduces the premise that will continue on for the rest of the characters' run, in that Freddy is always trying to steal something, usually from the bakery Ringy works at, but is always thwarted, and golly-gee-whillickers-isn't-he-just-precious? And there are cream puffs. Lots of cream puffs.
(There's also an odd text story in issue #14, which has a suspiciously similar Frank Fox, who tries to steal Petunia's ice cream. My guess is that the writer misremembered Freddy's name, and tried to have him interact with the main characters. Whatever the case, no "Frank Fox" ever appeared again, and the only other foxes were only in Henery Hawk stories.)


Ringy even appeared in an ad for the Looney Tunes comics that Dell would place inside their other publications.


The pair appear fairly regularly up to issue #20, after which nearly all of the more persistent filler disappeared (others having died quietly in earlier issues), likely because the writers and artists had gotten the hang of the characters, now that there were more cartoons to base them off of (Bugs especially).
(By the way, if anyone has issue #19, throw it our way. It hasn't been scanned yet!)
(UPDATE: Found a scan of #19, so now our Ringy collection is complete- albeit still filled with microfiche scans.)

Of course, this doesn't necessarily mean that Dell (and later Gold Key/Whitman) ever actually got the characters right. For decades, the Looney Tunes never appeared on-model in comics, books or merchandise, nor did they really behave like themselves. I have a couple of Golden Books from the late '70s that depicts Bugs as a lazy do-nothing who gets his comeuppance for making Porky do all the work for him, which is a personality trait that appeared as early as these first few years of the comics. No matter what, Sylvester had green eyes, Yosemite Sam was always a pirate, Daffy was always migrating somewhere and never cranky, and the Roadrunner constantly spoke in rhyme and had three identical children. It wasn't until the '90s that any of these guys actually looked and behaved like they did in the cartoons. You kind of have to wonder how many confused kids who saw them on TV there were.

In issue #48, Freddy is mentioned by name:


So what have we got here?

I suppose it's just one of stranger chapters of Looney Tunes history, but to me one of the most fascinating, in part due to the fact that we'll probably never know the circumstances that led to it happening in the first place. But mostly because I think Ringy is gosh-darned cute. 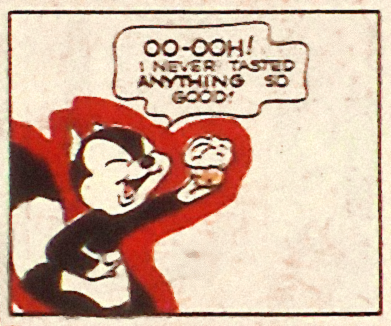 Email ThisBlogThis!Share to TwitterShare to FacebookShare to Pinterest
Labels: Animation